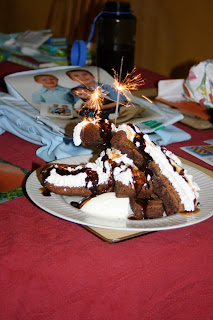 For my husband's birthday this year we had lunch at the Rainforest Cafe. Some of you may know it. It's a themed out restaurant based on (you guessed it) the Rainforest. You know you are in a certain stage of your life when your birthday lunch choice is really more of a treat for your kids than you. We actually did go out for a nice dinner sans kids the week after for our anniversary. As expected the kids loved all the animatronics and the 'storms' that happened every half hour. The price of the food was incredibly marked up (you are paying for the entertainment value of the restaurant!) On the menu that we didn't order, but saw many of was their signature dessert, the Volcano. This $15 baby (yes $15 for dessert) was always brought our by the servers announcing "Vooolllllcaaaannnnoooo" throughout the restaurant. Talk about showing off. Who was the special person that got such a treatment? And they really were flying out of the kitchen that particular day. We opted not to order a volcano. In my mind I did think that it looked easy enough to make...hmmmm.
So I did.
This is what I did:
1 box brownie mix - follow box directions to make brownies, or make your own from scratch - let cool.
On a large plate, scoop up lots of vanilla ice cream into the centre of the plate. Slice your brownies length-wise and form a pyramid over the ice cream. Spray whipped cream 'lava' down each of the brownie sides. Drizzle more 'lava' in the form of chocolate and caramel sauce (heated if possible). Stick a sparkler in the top, light it and call out "Vooooolllllccaaaannnnoooo!" as you carry it out to the guest of honour. Bring lots of forks, this is a lot of dessert, a must share (and then plenty left over).

BTW - my oldest boy thought this was fabulous and loved making it for his dad. My DH thought it was ingenious.
*I don't know why it looks like there were 2 sparklers in the picture above, there really was just one. 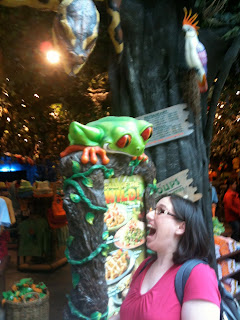 This is me being goofy just outside the Rainforest Cafe. I'm supposed to be looking scared of the big snake in the tree, but it looks like I'm being scared of the silly frog instead.
Posted by Kristen at 7:11 PM 5 comments:

Email ThisBlogThis!Share to TwitterShare to FacebookShare to Pinterest
Labels: desserts 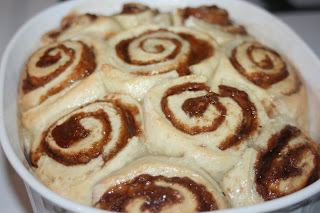 I got this recipe from Keeper Worthy Recipes, who got it from Ezrapoundcake.  See a good recipe really travels around well.  What makes these great (besides being delicious) is that there is no yeast involved.   They are start to finish less than an hour to do.

Mix all the dry ingredients with a wooden spoon.  Add 1 1/2 cups of the cream and stir until dough is smooth and forms a ball.  Use your hands (floured) to kneed a few times.
On a floured surface, roll dough out until it forms a 9x13 rectangle.  Brush remaining cream over it.  Sprinkle cinnamon mixture over the dough evenly.  From the long side, roll dough into a cylinder.  Slice into 9 equal rounds.  place the rounds cut side down into a n 8 inch square baking dish or pie plate.  Bake 30 minutes at 400*

While biscuits are baking, mix the icing together.  Drizzle over top the buns when they come out of the oven.
Posted by Kristen at 9:59 AM 6 comments: