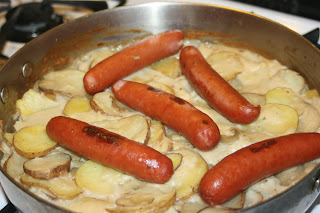 If you are a reader of Today's Parent magazine, you may recognize this recipe. It's one of the 'Dinner's in the Oven' recipes from the current issue (April 2010). I was really excited about this because I am living in a city now where I can easily find turkey sausage (traditional pork sausage does not agree with me at all) so I knew I could adapt the sausage and be able to eat it. Here's the recipe...then read on to see what happened.

*I did all as asked and my recipe turned out nothing like the picture. The potatoes were still crunchy and the broth was really thin, not at all creamy so here's how I saved it. I took the sausages off and set them aside on a plate. I then melted 1/4 cup margarine in a cooking pot, added 1/4 cup flour and blended to a paste, I then drained off the liquid broth mixture from the potatoes and added to the cooking pot. I whisked it all together and brought to a boil. This thickened everything up nicely. I poured it back over the potatoes, turned the oven heat up to 350* and baked it all for another half hour. It worked and was pretty yummy. I think if I were to make this again, I would add a flour mixture to begin with to be thicker to start. I would also up the cooking time to let the potatoes cook really well. The flavor was nice.
Posted by Kristen at 5:05 PM 2 comments: 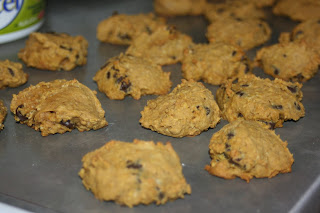 This was a recipe that I found on Recipezaar.com. They were tasty, but came out more like a welsh cake than a cookie. So I'm still on the search of Pumpkin Chocolate Chip cookies. If you have a recipe I'd love to try it :o) 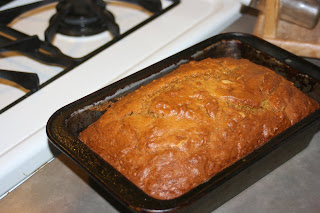 This yummy bread comes from Jean Pare's Company's Coming series. It's in the Muffins and More book. Company's Coming is a Canadian Cookbook series. I have 4 or 5 of the books and each recipe I try always turns out well.

Heat oven to 350*. Combine cream cheese, butter & sugar in mixing bowl. Cream together well. Beat in eggs one at a time until blended. Mix in pumpkin.
In another bowl combine the remaining ingredients. Stir until thoroughly mixed. Pour all at once over batter. Stir until just moistened. Spoon into a 9x5x3 inch loaf pan. Bake for 60-70 minutes (until an inserted toothpick comes out clean). Cool 10 minutes in pan. Remove to rack to finish cooling.

A Tale of 3 Avocados 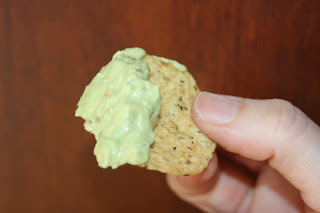 We bought a 3 pack of avocados in our shop. With the 1st we made smaller guacamole. The 2nd we put into a salad. The 3rd I credit my husband with. He created a really yummy dip.
1 Avocado
a dollop of Renee's Cesar dressing
a good shake of Cajun spice
Mash the avocado and mix in the rest. Enjoy with tortilla chips.
Posted by Kristen at 3:42 PM 6 comments:

Email ThisBlogThis!Share to TwitterShare to FacebookShare to Pinterest
Labels: dips 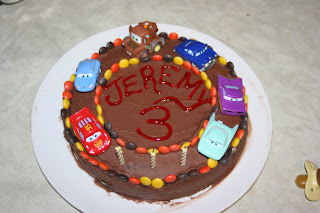 While I may be taking it easy cooking full force right now, there was no way that I was going to buy a birthday cake for my son's 3rd birthday. I used my wacky cake recipe (which I always use for my kids birthday cakes - it always turns out). The Cars characters came out of a pack of toys I fluked out to find. It was tricky to find a pack that had McQueen, Mater and Doc altogether. The road is lined with Reese's Pieces (my snack habit right now, Jeremy loves them too). An easy way to make a cute cake. 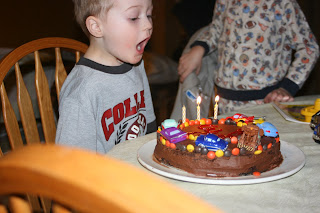