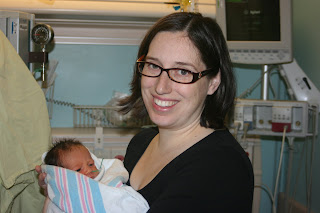 Hello my foodie friends. My daughter Olivia surprised us all with an early arrival a couple of weeks ago. We are truly blessed to have her. As she was born over a month early I've been spending much time travelling back and forth from home to the NICU. She has no health issues, but as most preemies do, just needs time to develop her strength to eat without the assistance of a feeding tube.
Thank you all for your wonderful recipe suggestions of food to make and freeze. I actually didn't get to make any of it yet as I was going to grocery shop right after my doctor's appointment. My doctor then sent me for blood work and then decided to keep me overnight and then decided that it would be in our best interests healthwise for our baby to be born that next day. Fortunately, I have a wonderful mother who flew out to lend a hand and a wonderful husband who shopped and planned our meals. I will make use of those recipes sometime in the near future.
Posted by Kristen at 4:50 PM 12 comments: 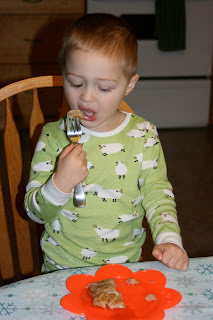 A friend of mine was searching for tips to make good pancakes on Facebook last week. I sent her my tips and links for my pancake recipes when I realised that I have never posted my basic pancake recipe on here. How could that be? I'm always making pancakes. So here's my recipe, it comes from Betty Crocker's Red Cookbook (adapted a little).

1 large egg
1 cup all purpose or whole wheat flour (I almost always use whole wheat)
3/4 cup milk (I usually up this to a full cup of milk, it depends how thin or thick you like your pancakes)
1 tbsp sugar
2 tbsp veg. oil
3 tsp baking powder
1/4 tsp salt
(not called for but I usually add a tsp of vanilla extract too)

Beat egg until fluffy. Add rest of remaining ingredients and mix with a whisk (don't over mix). Heat griddle or pan over low-medium heat (or 375* on griddle). Grease with non-stick spray or margarine/butter. For each pancake pour about 1/4 cup of batter onto the heated pan. Cook until they are bubbly on top, then flip to cook the other side. Serve with margarine/butter and syrup.
Posted by Kristen at 9:44 AM 5 comments:

Calling All Cooks - A Challenge!

Hi everyone! Some of you know that we are expecting baby #3 in a month. I'm starting to make ahead freezer meals so I don't have to cook much during that first month of newborn life. I've already got a chicken corn chowder done and plans for a lasagna. I'm looking for great family freezer recipes to add into my deep freeze over the next month - any links that you have on your blogs would be so appreciated by me in my comments section! Thank you ahead of time :o) Cheers!
Posted by Kristen at 6:54 PM 7 comments: These are my very favorite treats, anytime of the year. I don't make them often because you can imagine how much weight I'd gain if they were always around the house. So I make them at Christmastime and just one batch. Someone once commented to me that of course I like these because I'm from BC. Are these a BC treat? I don't know? I've seen them other places. Anyone know?

Place 1st 5 ingredients into a glass bowl. Set bowl in a pan of hot water. Stir until butter is melted. Mix in next 3 ingredients.
Pack into an ungreased 9x9 pan.
Combine next 4 ingredients - cream together. Spread over mixture in pan. Chill.
Melt chocolate and butter. Spread over top of the other layers. Chill.
I usually freeze this all at this point and then cut once everything is set.

*edit - what doesn't wikipedia know? http://en.wikipedia.org/wiki/Nanaimo_bars They are a very Canadian, very BC dessert
Posted by Kristen at 6:37 AM 6 comments: 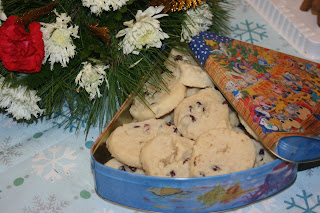 So I'm really, really behind on my blog posting. Yes, this was a pre-Christmas recipe that just didn't make it (I don't think I posted in December at all!) But the recipe is too good not to share and I have the pictures now anyway, so the next few days will have some treats posted in them.
This recipe was passed down from my mom who got it from her Uncle Eddie's neighbours, some nuns in Saskatchewan from long ago. The base recipe is good on its own. I change it up by adding some dried cranberries to it. My mom told me this year she dipped half of each of her cookies into chocolate which was delicious too. Here's the base recipe:

Cream together butter and sugar. Add flour, cornstarch and vanilla. Beat together. Form dough into a log and slice 1/4 inch thick for each cookie. Bake at 300* for 12 minutes.
Posted by Kristen at 7:53 AM 3 comments:

Lobster Night in the Maritimes - what a way to say goodbye! 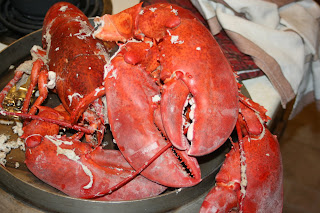 This isn't as much of a how to cook lobster as much as a very fitting way to say goodbye to the place I've called home for the past 7 years. We recently moved out of the Maritimes into the big bad city for the next year while my husband works on his Master's degree and I take maternity leave (baby's due next month). One of the last things we did was have a seafood night with some wonderful friends of ours. We picked up the oysters, they picked up the lobsters! (The guys also did some oyster shots with lemon and seafood sauce - not my thing, but they like it)
If you haven't heard about the plight of the local lobster fishermen, CBC ran a great story on it as many, many people decided to get their Christmas lobster right off the wharf this year. You can read about it here.
And eat lobster we did! I've never seen lobsters the size of these ones before. Oh they were so delicious.
We let the kids see them and play with them on the kitchen floor for a while first. I did get some lovely pictures of that, but part of my new blogging policy is to be very vigilant on the pictures I post of my kids and their friends for privacy and safety purposes.
Our friend Larry got this huge pot of water going to a roaring boil on the deck, while his wife Luan and I made melted garlic butter on the kitchen stove.
Once the water is going, you just drop them in and cook them until their shells turn nice and red.
Getting into the shells was another story. These were not your average crack the lobster open with lobster tools. We had to get some serious tools out to crack these claws and tails open.
The meat was delicious dipped in the garlic butter and so filling! We had so much meat left over. I don't know what our friends did with theirs, but I ended up making mine into a manicotti that I'll post soon. 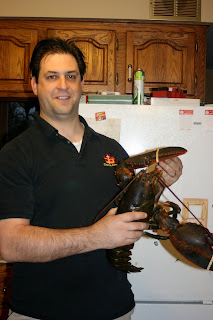 My dear husband with the lobster before cooking. 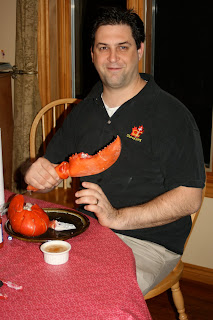 Ready for eating now!
Posted by Kristen at 6:03 PM 7 comments: