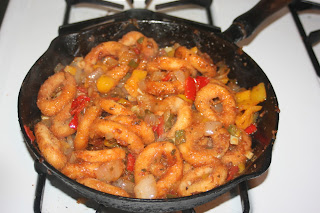 This kitchen experiment of mine (like any good recipe) has a back story. My husband I both enjoy eating out, a lot more than we should. In fact at one point we were going broke because we were eating out way too much. The funny thing is that we both like to cook and we are both good cooks. I think we were just tired. We also were finding it increasingly difficult to order when we were out because we didn't want to order anything that we could make at home (and better). We both have a kind of agreed upon policy to order things we can't make at home just as good.
One of our favorite chains to eat at is East Side Mario's. And I pretty much order the same thing every time. Sizzling Calamari Al Diavolo to start and then their Seafood Linguini. The Calamari dish was a fluke when we once ordered regular calamari and they brought us this by mistake. We were instantly hooked. I love this dish.
We are now pretty much reformed from eating out. Eating out has become a treat for once in a while once again. So it really was a treat to stop at East Side Mario's on our way home from a camping trip this August. And of course I had the Calamari. Since then I'd been thinking that there must be some way to make this. We have a cast iron skillet after all. Then last week at my grocery shop a bag of calamari just jumped out at me from the freezer section. I bought it. Last night I did my best to imitate East Side Mario's recipe. Their menu gives a few clues on what's in it. The rest is just my guess work. I was really happy with the results. So was my husband. He said I got the flavor bang on. Yay me!

I couldn't find any cherry peppers, so used a jalapeno instead. I also realized I was out of green peppers, so I substituted a yellow in it's place. Here's my recipe:

1 tsp olive oil
1 onion, cut into chunks
1 red pepper, cut into chunks
1 yellow pepper, cut into chunks (can use green)
4 cloves garlic, chopped into small pieces
1 jalapeno pepper, seeded and chopped into small pieces
1/4 cup fajita cooking sauce (I used PC Brand Memories of Mexico, but I think any tomato based fajita sauce would work)
2 tsp chicken bouillon powder
up to 1 cup water
2 tsp Tex-Mex seasoning
a few shakes Franks Red Hot Sauce
1 pound pre-breaded frozen calamari (this would be even better if you made your own breaded calamari I think)

Drizzle a cast-iron skillet with olive oil over medium heat. Add the veggies. As the veggies begin to soften add the fajita sauce, chicken bouillon, Tex-Mex seasoning, and Frank's Red Hot Sauce. Mix together. Let the veggies cook slowly to soften well. Don't be tempted to cook it fast or it will burn. Drizzle a little water as needed to keep the food from catching, but don't drown it. Once everything is cooked to done, add the calamari and mix in. Cook for just a couple of minutes to heat the calamari up (cooking too long will leave calamari rubbery). Serve immediately.

*The next time I make this, I'm going to try to deep fry the calamari and then mix it in, just to try to improve the texture a bit. Otherwise, really yummy.

**Edit Update - I made this again, but baked the calamari according to package directions first, then added it to the veggie mix. It was delicious! Much better than adding the calamari in without cooking it first.
Posted by Kristen at 9:44 AM 6 comments: 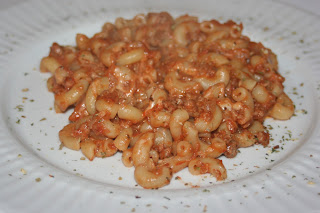 This is an extremely kid-friendly, fall yummy sort of meal.  It is also super-easy.

Cook macaroni according to package directions.  While macaroni is cooking, saute the beef in a large frying pan with the garlic, onions and Italian seasoning.  Once the beef is browned add the tomato sauce and paste.  Mix everything together well.  Drain the macaroni and add to the mixture.  Add as much grated cheese as you desire (about 1/2 cup - 1 cup works well).  Mix everything together to melt the cheese in.  Serve and enjoy!
Posted by Kristen at 11:58 AM 7 comments: 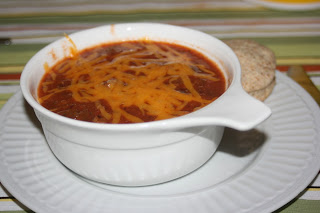 For the first few years of our marriage, I'd make chili and my husband would eat it, but not enjoy it. The problem is that he really, really loves chili, but I couldn't seem to find a recipe that he liked. So I stopped making chili altogether. That was it. If I wanted chili, I'd get a bowl from Tim Horton's or Wendy's. Now that the fall weather is here, I was craving chili again. I thought I would scour my favorite blogs and recipe sites until I found the perfect recipe and make it. My friends, I have found that recipe. This was the perfect chili. And yes, my husband enjoyed it too. This is my keeper. I found it on food.com (formerly Recipezaar.com) and it is delicious. The only differences that I did with this recipe was use our homemade tomato sauce instead of canned, increased the onion to half an onion, and added a finely chopped green pepper to the mix. Other than that I made it according to her directions. So enjoy, the perfect chili.

Mix together seasoning mix.
Store in an airtight container in a cool, dry place. 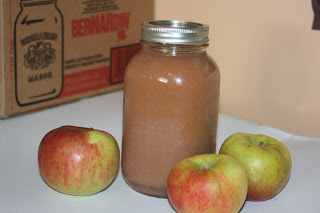 We had a fantastic time apple picking this year.  But you know how it is, apple picking goes so fast that the kids fill your bags with more apples than you can possibly use.  But this is the year I started canning, so I thought I'd make a little (read a LOT) more applesauce than usual.  My kids love it.  I looked up a bunch of recipes on sites I like and then thought I would just do the math to make a large batch of the applesauce recipe that I used last year.  That recipe was posted by Heidi of Tried and True Cooking with Heidi.  It is the best applesauce I've had.  You can find the original recipe here.  I used 38 apples in my canning version (although it would have been easier to use 40, now that I'm thinking about it, so I'll post as if I used 40 apples)

Peel and slice all your apples.  Place all of the ingredients into a large stock pot and mix.  Cook until the apples are soft, stirring occasionally.  Use a hand blender to puree.
Prepare your canning jars and lids.  I think you can use a water bath for canning applesauce, but I have been schooled in the safety of pressure canning.  I pressure canned this for about 20 minutes at 11 psi which worked beautifully.
Posted by Kristen at 6:50 PM No comments: 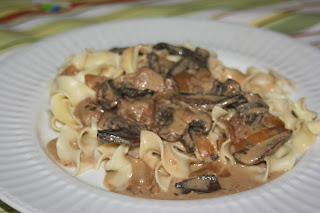 This is super tasty fall comfort food. I adapted a recipe I found for a venison stroganoff, using stewing beef instead of venison, mini-portabellos and a crock pot. The result was absolute yum.

Heat the olive oil in a frying pan. Mix the flour and paprika together in a medium mixing bowl. Add beef and coat. Once the beef is coated, sear it in the heated olive oil. Remove from heat once all sides of the cubes are done. (throw away the excess flour)
Spray a crockpot with non-stick spray. Throw in the beef and the remaining ingredients except the sour cream and mix well. Cook at low heat for 6-8 hours. Add the sour cream at the end, mixing it in. Serve over egg noodles or rice.
Posted by Kristen at 4:15 PM 2 comments: 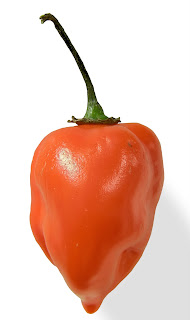 Friends of ours grow their own peppers each year. They know that we are foodies like them (as we often trade recipe ideas and treats that we have made). This year they grew some habaneros and asked if we would like some. Sure, I've never cooked with them before, being a little fearful of the intense heat, but what the heck.
My first venture out, I decided to add them to a batch of salsa.  The original recipe called for 10 jalapeno peppers, so I wasn't sure exactly how many habanero peppers to put in their place.  I looked up the heat charts and thought that 2 would bring the heat up.  The salsa turned out well, but not nearly as spicy as I wanted to make it.  I think I'd use 4 next time with that volume.
The unfortunate part of that cooking experience was that I just wasn't thinking about handling the peppers.  I didn't wear gloves.  Oh my word!  The undersides of my fingernails were burning.  Really really burning.  And not thinking again, I tried to wash the oil off my fingers - note to self - water makes the heat re-intensify. Ouch!  Thank goodness I remembered not to let the baby suck on my fingers for teething relief until the oils were truly gone.
Today I tried out a recipe for a roasted spicy squash soup.  Doesn't that just sound lovely?  I mean, I dream of recipes like this for fall.  It called for 3 habanero peppers (I used only 2).  Okay, I really, really have to learn my ratios for this little pepper.  The house smelled so fragrantly wonderful.  I roasted the squash and peppers and garlic.   I used fresh turkey stock that I made from my Thanksgiving turkey this past weekend.  It should have been beautiful.   Until I tasted it.  Oh mouth on fire!  Mouth on fire!  My husband laughed at me.  But I thought at least he could enjoy it, loving spicy food that is really fiery more than I.  Nope, he can't eat it either.  At least not a full bowl full.  Too bad.  Here's the link to the recipe for those who really like heat in their soup.
So now I am not sure what to do with the rest of the peppers.  They still sit there inviting me, making me believe that I can use them in something and it will turn out alright.  I like spicy, but not so spicy that I can't eat it.  I know some of you are better at this than me!
Incidentally, here are a couple of ways I learned you can reduce the heat from a habanero pepper oil on your skin:
-white toothpaste
-soak your hands in a bowl of cold milk
Posted by Kristen at 10:20 AM No comments: 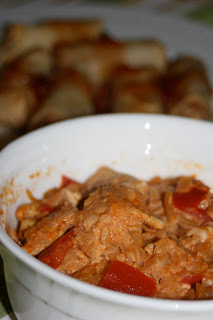 I read in a book recently how cliche the love of Thai food in the west is becoming.  That people are discovering fish sauce like some great new secret ingredient.  It's true, we've got a love affair with Thai food and I'm no exception.  I love it.  My husband and I have been trying to re-create a red curry that would be as good as the one at our favorite restaurant back home in the Maritimes.  This is the closest we have come.  It is really, really good!

I find it helps to get everything prepped first because this meal comes together so quickly.  My ingredients are listed a little backwards, so you'll have to work with me on this one.

Fist, heat the oil and melt the butter in a saucepan, or large (deep) frying pan (medium heat so you don't burn the next ingredients).  Add the onions, shallots, garlic and ginger.  Cook to let them become soft, but don't overcook to let them burn.  Add the curry paste, mixing it in to coat the veggies.  Add the chicken and let it cook through.  Pour the coconut milk over everything as the chicken is cooking.  Add the rest of the ingredients and let simmer for a few minutes.  Serve over rice.